– a beautiful dale in the Western part of the Yorkshire Dales National Park.

These words by Abraham Lincoln are words we try to live by. We are proud of our beautiful surroundings, and we hope that we are helping to enhance the area by bringing visitors and hence prosperity. Many of our trainees return with their families, either for holidays or combined holidays and training. They clearly enjoy the training and the setting, and this is something we are proud of.

Garsdale is an East-West valley lying between Baugh Fell to the North and Rise Fell to the South. At the Western end of Garsdale is the market town of Sedbergh where the public school, Sedbergh School, has a reputation for producing international rugby players. At the Eastern end of Garsdale is Garsdale Head, with a railway station (Garsdale station & Hawes junction) on the famous Settle to Carlisle line, and where the Moorcock pub marks the junction of the roads through Wensleydale and Mallerstang.
Although Garsdale is in the Yorkshire Dales National Park, with the boundary changes to counties in the seventies it was placed in Cumbria for other administrative purposes, and indeed Kendal is only 20 minutes drive away.

The Clough river flows through Garsdale until it joins the Rawthey near Sedbergh. Although it is mostly a quite shallow river there are pools where it is possible to swim, but even in the hottest weather the water is still very cold. At times when there has been more rain, the increased water levels make it possible to kayak down parts of the Clough. However, the rocky nature of the Clough would not make it a suitable place for inexperienced canoeists.
Garsdale is a narrow dale in which the A684 closely follows the Clough river. The exceptions to this are at either end of Garsdale, where the road rises from the river. At the West end of the dale, there is an area of common land known as Longstone Fell (pronounced Langston) with a car park and viewing position. The views from Longstone Fell are fantastic, with Sedbergh and the Howgill Fells to the West and North-West, whilst to the East is Garsdale itself.

From the viewing position at Longstone Fell it is possible to walk down to Danny Bridge and join the Sedgwick Trail. This trail, named after the great geologist Adam Sedgwick (1785 – 1873), runs along the river and highlights rock features visible in the river banks, with this part of the river crossing the Dent fault line.

Garsdale has produced three brilliant minds that have had a lasting influence on their scientific fields, John Dawson a renowned mathematician, John Haygarth a medical pioneer, and James Inman a naval astronomer and mathematician.

John Dawson (1734 – 1820) was born at Raygill, a farm in Garsdale. A self-taught mathematician, he studied medicine in Edinburgh but did not have the funds to complete his studies there so returned to Sedbergh and saved enough to complete and qualify as a surgeon in London. Although he set-up in practice in Sedbergh it was as an exceptional teacher that he is best remembered. He was such a successful teacher of mathematics that students came from all parts of England to study with him in Sedbergh, and his pupils included 12 Cambridge Senior Wranglers during 1781-1807. A portrait monument to him was erected in Sedbergh Church, in whose churchyard he is buried. There is a Dawson’s Rock in nearby Garsdale where he is said to have mused on his system of conics.

John Haygarth (1740-1827) attended Sedbergh School, and then in the summer of 1756 he studied mathematics under the tutorship of John Dawson. he went on to St John’s college Cambridge as Hepplethwaite Scholar in 1759, but after three years decided to continue his medical studies at Edinburgh. After three years in Edinburgh, and some time studying in Leyden where he matriculated in 1765, he returned to Cambridge to graduate M.B. in 1766. In 1767 he was appointed Physician to the Chester Infirmary, where he kept detailed records and researched infectious deseases. Amongst his medical successes where the introduction of fever hospitals (isolation wards) to help prevent the spread of diseases, and the first recorded placebo experiment establishing the basis for modern clinical trials. Throughout his careeer he applied mathematical analysis to his records and research, and was able to establish the nature and distances over which infections could spread. In 1798 he moved to No. 15 The Royal Crescent in Bath, and was involved in the setting-up of the Bath Savings Bank. Although buried at Swainswick church, he was a lifelong friend of John Dawson and kept in touch with Garsdale though his nephew who looked after his affairs there.

James Inman (1776 -1859) professor of navigation and nautical science, was born at Garsdale Foot, a house with fantastic views of Sedbergh and the Howgills. The family of substantial statesmen had owned property in the neighbourhood from the time of the dissolution of the monasteries. James received his early education at Sedbergh grammar school, and subsequently became a pupil of John Dawson, and although he entered St. John’s College, Cambridge, in 1794, he did not go into residence till 1796. Inman graduated B.A. in 1800 as senior wrangler and first Smith’s prizeman, and was elected to a fellowship. Though with no immediate intention of taking orders, Inman turned his thoughts towards mission work in the East, and set out for Syria. The course of the war rendered it impossible for him to proceed further than Malta, where he devoted some time to the study of Arabic. On his return to England he was recommended to the board of longitude for the post of astronomer on board the Investigator discovery-ship, and joined her on her return to Port Jackson in June 1803. When the Investigator’s officers and men were turned over to the Porpoise, Inman was left at Port Jackson in charge of the instruments; but after the wreck and the return of Flinders, Inman accompanied him in the Rolla, and assisted him in determining the position of the reef on which the Porpoise had struck. With the greater part of the crew he then returned to England, via China, being assigned a passage in the East India company’s ship Warley, in which he was present in the celebrated engagement with the French admiral Linois off Pulo Aor on 15 Feb. 1804 [see Dance, Sir Nathanial; Franklin, Sir John] and put in charge of the Lascar pikemen. In 1805 he proceeded M.A., and about the same time was ordained, though he does not appear to have held any cure; he proceeded to the degree of B.D. in 1815, and of D.D. in 1820.

On the conversion of the Royal Naval Academy at Portsmouth in 1808 into the Royal Naval College, Inman was appointed professor of mathematics, and virtually principal, and here he remained for thirty years. In this office Inman turned to good account the knowledge of navigation and naval gunnery which he had acquired at sea. In 1821 appeared his well-known book, ‘Navigation and Nautical Astronomy for the use of British Seamen,’ with accompanying tables. In the third edition (1836) he introduced a new trigonometrical function, the half-versine, or haversine, the logarithms of which were added to the tables, and enormously simplified the practical solution of spherical triangles. After long remaining the recognised text-book in the navy, the ‘Navigation’ has been gradually superseded, but the tables, with some additions, still continue in use.
It is said that Inman suggested to Captain Broke [Broke, Sir Philip Bowes Vere] some of the improvements in naval gunnery which were introduced on board the Shannon. He published in 1828 ‘An Introduction to Naval Gunnery,’ designed strictly as an ‘introduction’ to the course of scientific teaching. It was during this period also that he produced for the use of his classes short treatises on ‘Arithmetic, Algebra, and Geometry,’ 1810, and ‘Plane and Spherical Trigonometry,’ 1826.
At his suggestion the admiralty established a school of naval architecture in 1810, and Inman was appointed principal. To supply the want of a text-book, he published in 1820 ‘A Treatise on Shipbuilding, with Explanations and Demonstrations respecting the Architectura Navalis Mercatoria, by Frederick Henry de Chapman, . . . translated into English, with explanatory notes, and a few Remarks on the Construction of Ships of War’. To Inman’s labours was largely due the improvement in English ship-building during the first half of the century. In 1839 the college was again reorganised, and Inman retired.
Inman married Mary, daughter of Richard Williams, vicar of Oakham, Rutlandshire, a direct descendant of the mother of Sir Isaac Newton by her second husband. In addition to the works already named, he was also the author of ‘The Scriptural Doctrine of Divine Grace: a Sermon preached before the University,’ Cambridge, 8vo, 1820, and ‘Formulæ and Rules for making Calculations on Plans of Ships,’ London, 8vo, 1849.
A portrait of Professor Inman hangs in the naval library at Portsmouth, near to where he used to teach. A copy of this portrait, kindly supplied by the Ministry of Defence, hangs in the ‘Inman Training Room’ at Lucid’s training centre in Garsdale. This is fitting as Lucid is based in a building owned by Professor Inman although he lived most of his life in Portsmouth. 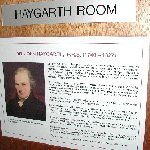 Other training rooms at Lucid are named after James Inman and John Haygarth, whilst our practical work area is named after John Dawson.

The view below shows an evening in Garsdale in August. The photograph is taken from half-way up Rise fell looking across Garsdale at Baugh fell to the North and the Howgill fells in the distance to the West. Sedbergh is at this end of the dale at the foot of the Howgills.

The view below shows an old stone quarry on Rise Hill above Garsdale, with Lucid Training Centre just visible in the bottom of the dale in the middle of the photograph. The view opposite shows Lucid Training Centre, partly obscured by the trees along the river bank, and bathed in evening sunshine. This is a peaceful and relaxing place to be and conducive to learning.
Of course it rains sometimes (there is a reason the grass is always so green in the Yorkshire Dales!), but this yields views of its own as the river froths and streams run like white ribbons down the hillside. At other times in winter it can snow – sometimes just a dusting of white on the tops of the hills, and sometimes a more significant fall as in the picture opposite.

For more information on Garsdale and photographs of the Dale follow this Garsdale link.

Our closest town of Sedbergh is around 5 miles from our training centre. The town is dominated by Sedbergh school, a famous public school, and book shops as it has recently become England’s first book town.
There are however several other good things about Sedbergh, including good places to eat and drink, excellent walks a leisure facilities. Follow this Sedbergh link for more about our nearest town, and in this link if you click on their links page there are links to other neighbouring towns such as Dent, Kendal, Kirkby Lonsdale, Kirkby Stephen and Hawes.