The study below relates to low-cost laser pointer work presented to the North West Photonics Association AORD seminar on 15th June 2010, and provides useful background information on laser classification and issues. If you are looking for further laser safety information on a 1W blue laser pointer labelled by the press as a ‘ lightsabre’ as it resembles some childrens toys based on the Star Wars film, then we have posted some calculations here. You can also find information about assessing possible distraction hazards here. 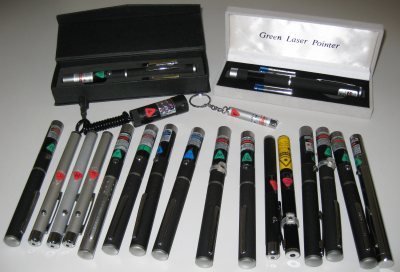 A selection of 20 low cost (all under £14 and most under £7) laser pointers were purchased and tested for output power and divergence characteristics.

The study has shown that not only are high power laser pointers now available at very low prices, but they are also commonly advertised as much safer and lower power devices than their actual output. The mislabelling is a concern as users may be unaware of the true hazard posed by the laser pointer, which may also be treated trivially in any workplace risk assessment. Similarly, the low prices mean that these devices are now within the purchasing power of children, with a host of safety issues resulting.

The back ground for this work goes back to between November 2008 and March 2009, when our Technical Director, John Colton, was expert witness in a court case where a police helicopter had been exposed to the beam from a basic laser pointer. As part of this work John and some colleagues at Lucid used a variety of equipment and our own laser safety software package to measure the laser power level, divergence and other parameters of this laser pointer. It was labelled as <20 mW, and was in fact outputting 8.5 mW of green laser light at 532 nm.

In April 2010, John then bought a new green laser pointer for demonstrations on our laser safety courses. This was advertised as below 1 mW, and cost around £6 including postage over the internet. When it arrived, it was labelled as <1mW power, but it was so bright that John decided to measure it. This result was 125 mW, which rather shocked us for a laser at this price level, and prompted a decision to buy a number of low cost laser pointers and carry out a study to see if this mislabelling was a one-off.

The lasers in the study

Laser pointers are now available in several colours, or wavelengths, most commonly as follows:

Eleven of the twenty pointers tested were purchased from within the UK, whilst the remaining nine were supplied from the China, Hong Kong or Singapore. It appears that the UK and Far East supplied lasers are very similar and all are likely to originate from the far East.

In UK and EU, lasers are classified according to the table below. The class, and hazard, of a laser depends on both wavelength, the power, the spot size and the divergence i.e. how much the beam spreads out.

For laser pointers where the wavelength is visible, the source size is small and the divergence is generally low, the upper power limits for each class of laser can be readily tabulated:

This table shows the classification that is used in the UK , the EU and most of the rest of the world (IEC 60825:2007-1). The US now uses a very similar system with the same classes (Ansi Z136.1-2007). Prevously, the US had a different class system, where classes were denominated in lower case letters and roman numerals, such as class IIIa. There is no direct translation, but class llla corresponds roughly to class 2M in the UK system.

Many of the laser pointers in the study were labelled incorrectly against any known classification system (UK, IEC/international, new US and old US)

All eleven green (532 nm) laser pointers were found to be well into Class 3B, a class were direct exposure of the human eye to the laser beam is hazardous, with the potential for permanent retinal injuries.

The lowest power green laser tested appeared to be faulty, with intermittent operation and the odd brighter flash indicating that this laser might well be higher power if functioning correctly.

Only green laser 8 was labelled as IIIb, and this is an older US style label rather than a UK or international label.Many of the other lasers are labelled with classes of laser that do not actually exist, and can therefore be of limited use, particularly when they state power levels that bear no relation to the measured power output.

These are one of the newest colours of laser pointer, with wavelengths at 405 nm which is only just in the visible spectrum. In consequence, these lasers appear less bright which can make users feel they are not as big a threat to the eye as they are.

The classification of lasers is based on the risk of injury.

Since laser output is typically in a narrow beam of light, the hazard can exist for a long distance along that beam. An important parameter in the risk assessment and management of lasers is the Nominal Ocular Hazard Distance (NOHD). This is the distance from the laser aperture within which direct intrabeam exposure of the eye would exceed the Maximum Permissible Exposure (MPE) level. Beyond the NOHD any exposure to the laser beam is normally regarded as being safe in that it will not result in any injury to a normal person.

Any Laser with of a class above Class 1, will have an NOHD greater than 100 mm, but the laser standard dictates that the NOHD is normally calculated for an exposure duration of 100 s, whereas for exposure to a visible laser pointer such an exposure duration would require deliberate effort. Exposure would most likely be a short duration, with the eyeball moving rather than remaining still. In order to indicate the potential for accidental injury, we have calculated the MPE for a 0.1 s exposure, and then used this limit to calculate the “0.1 s NOHD”. In other words this is the distance within which an expose of just 0.1 s to the direct beam from the laser could cause a retinal eye injury.

The 0.1 s exposure NOHD demonstrates that the Class 2 laser represents a reasonably low hazard for accidental exposure by producing an NOHD of 0 m.

There are other distances where hazards exist for other reasons. In the case of the exposure of aircraft pilots or car drivers, there is also a ‘dazzle’ hazard due to the temporary, possibly only momentary, loss of vision. A similar hazard could apply to any worker performing a critical task where temporary loss of vision or even distraction, could affect safety. In this circumstance the most appropriate standard would be the US ANSI Z136.6 standard as there is not yet a UK or international equivalent.

In particular, the ANSI Z136.6 standard defines visual interference limits for ‘flight zones’ depending on the potential hazard within each zone. The standard effectively takes account of the fact that during more safety critical stages of flight, such as landing, a distraction alone could prove hazardous, whereas during ‘normal flight’ a dazzling light level, whilst undesirable, may not be hazardous if its effects are only momentary.

The Laser Free Zone, for example, is the area immediately above the airfield extending to a height of 2000 feet, where aircraft landing or taking-off could be at risk if the pilot is distracted, or worse panics, for even a brief time. Indeed any sudden bright light could be taken to be the navigation light of another aircraft on a collision course!

Similar principles can be applied to other tasks, most obviously driving a vehicle, where dazzling light levels could be hazardous, but also to some other workplace tasks. The visual interference zones are designed for exposure during periods of low ambient lighting, since the ability to produce ‘glare’ or ‘dazzle’ is highly dependent on the state of adaptation of the eye. For example car headlights that dazzle at night will not be a dazzle hazard in normal daylight conditions.

These values have not been corrected for the Photopic Luminous efficiency of the eye, or for atmospheric absorption and scattering effects (they are considered ‘vacuum distances’). These corrections will make only a small difference to the figures quoted above, but would, for example, yield SZ distances approximately 7 or 8% shorter than those quoted in the table above. In practice the corrections are not linear and so a simple percentage value can not be quoted for all values.

In effect the attempts to limit the sale of high-power laser pointers to the general public appear to have resulted in a deliberate mis-labelling so these pointers can be sold without impairment. This selling and mis-labelling of hazardous, high power laser pointers as relatively safe Class 2 devices is a concern as many users are unlikely to realise the hazards posed by the device they are using.

Private users, who are unlikely to have any means of testing the devices, will likely have no idea that what is labelled as safe to use in classrooms, playing with cats and star watching, could in fact cause permanent eye injuries, or imprisonment for interference with flights. The low cost of these devices compounds the problem, as people simply do not expect to pay under £10 for a 1mW laser pointer and get one with 50-200 times higher power than they have paid for!

Companies who have to carry out risk assessments in order to comply with the new Artificial Optical Radiation Directive (AORD) could also be caught out, as very few will have the equipment to actually test lasers, rather than just trusting the label.

Of even wider ranging concern is the whole principle of manufacturers deliberately mislabelling devices with safety information rather than just designer logos. This study demonstrates that private and commercials consumers must be aware that safety labels can’t automatically be trusted, particularly when the supplier is not a known or reputable seller.