Until recently Light Emitting Diodes (LEDs) were used predominently for indicator lamps on equipment or in vehicles, where their reliability, compact size, low cost and low power consumption made them ideal for a wide range of indicator applications. As LED technology has moved on they are increasingly used for more sophisticated displays and specialist lighting applications. This has led to a demand for higher and higher power output LEDs for illumination purposes and a requirement for white LEDs, and LEDs of all colours within the visible wavelength region.

It is fair to say that in the past the low power output LEDs did not pose a significant optical hazard, but the same can not be said of the newer high power LEDs. This is particularly true of some colours of LEDs, where there are now significant safety concerns. Super-bright LEDs can and do now pose a hazard to the human eye, and LED safety should be considered and assessed for all products using these high output LED chips.

At Lucid we are keen to see LED technology used more widely as LEDs have some great advantages, not least their environmental benefits in being far more efficient light sources than most other traditional forms of illumination. Additionally, their reliability and low power consumption make LEDs ideal for aiding safety by providing emergancy illumination, and items such as LED torches and head-mounted LED lights for people working in hazardous environments. We believe LED safety training should take a balanced approach such that LEDs are promoted and used safely as possible, with appropriate safety design being considered as soon as possible in the design of any LED lighting product.

The optical hazard from an LED originates largely from the fact that a very high optical output can come from a very small area (the emitting active area is often a fraction of the size of the traditional LED dome encapsulation packaging), hence the light can be focused to a small spot on the retina at the back of the eye. The additional complications with LED safety are that the light is generally not monochromatic (single coloured), but rather is broadband with light of different wavelengths (colours within the output spectrum) possibly being in different hazard regions. In addition, the output from LEDs is generally divergent, i. e. spreading out with increasing distance from the LED chip, but lenses are often used to reduce this divergence. Therefore LEDs are often manufactured into LED arrays in order to provide a much more powerful output, so simple divergence rules do not necessarily apply.

In order to assess LED safety it is necessary to know a wide range of parameters for the LED and the way it is presented. Even for just a single LED source, these parameters include the spectral power output of the LED, the divergence pattern of the LED (that may not be a simple Gaussian or Lambertian distribution as is evidenced from the single LED output photo opposite) and the apparent source size. Although there will be some cases where each of these parameters is well-defined and simply modelled, there is scope for each parameter to be complex and difficult to define and assess. For multiple LED arrays, things become more complex, and the alternative to modelling the output for safety assessment is to do measurements. However, this requires a wide range of distances, angles and set-ups, which in turn require a flexible LED safety test-bed.

Complex arrays and light output distributions can make a paper based assessment very difficult, but similarly result in more measurements being required in order to ensure that the most hazardous part of the light output has been assessed. This position may be further from the light sources that might be imagined by the layman. The rather “arty” picture to the right below shows a close-up of a lensed blue LED array at an angle to the optical axis. It can be seen that some of the LEDs appear brighter than others at this angle, this can mean that the area to the left of the LED array might be more hazardous than that to the right hand side, although this may be different at another angle. This is important since the safety analysis of an LED array requires imaging of parts of the array to be considered. If much of this LED safety page appears blue, that is because a particular concern is an issue known as the ‘blue light hazard’. This blue light hazard corresponds to an area of the visible spectrum where there is an increased chance of eye injuries since the light is visible, and hence focussed to a spot on the retina, and can result in photo-chemical damage. In addition, the eye is less responsive to these blue hazard wavelengths, and hence they may not be perceived as being dangerously bright. Another common mistake is to imagine that the blue light hazard issue only applies to blue LEDs, since many white light LEDs use a phosphor coating to give off white light and excite this with a short wavelength of blue light. It is sometimes this blue light from ‘white-light’ LEDs that can be hazardous even though it is not very visible – that is the light source does not appear blue although the blue light can be more powerful than the white light.

For a more detailed summary of the hazards posed by LEDs please see the article “High Power LEDs Pose Safety Hazards” which was written by our Prof. G.R Davies and appeared in the February 2007 edition of Photonics Spectra magazine on pages 66 to 68. This article has been very well received with many favourable comments and references from a wide range of people who have read it.

The assessment, or test measurement, of LED safety can become very complicated with all of the above factors needing to be taken into account. The industry cannot, however, just ignore LED safety because it is difficult and sometimes complex. Health and safety legislation demands that risk assessments are carried out, and a new European directive will demand that LED safety is treated seriously with formal assessments and classifications becoming mandatory when it is issued at the end of this decade.

At Lucid we are well-placed to assist with your LED safety issues. We can assist by providing a flexible range of training and consultancy services, such as:

The photograph above shows our Professor Geoff Davies (left), and John Colton (right) checking the output spectrum of a high output blue LED in the wavelength range of 380 to 520 nm, the blue end of the visible spectrum. The photograph taken in daylight in our offices shows how bright the LED light source is on Geoff’s hand and the front of the optical spectrum analyser (OSA) being used. The reader is left to imagine how it might have felt to look directly into an LED of this power.

If you are interested in discussing our LED Health and Safety training courses or consultancy services please contact us for further information. There is no hard sell, and we will do as much or as little as you require to help you with your LED safety concerns. 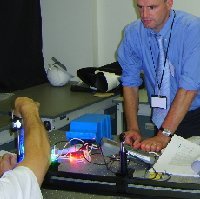 LED safety training courses, seminars and events can be developed to suit your needs and may be delivered at your site if required. We do not charge a premium for developing bespoke courses and many clients find this a rewarding cost-effective experience and much less expensive than they at first feared.

All of our courses are delivered by expert trainers, and trainees all get a comprehensive, full-colour training manuals to take-away.

A Laser Protection Advisor is a professional laser/LED safety expert who is retained on an annual contract to carry out Laser Safety assessments, implement procedures, recommend safety goggles and liaise with your staff as appropriate – a bit like using an external accountant. Using an LPA is an alternative to training in-house staff up to taking on the role of Laser Safety Officer. This option is particularly suitable in the medical, cosmetics and similar industries, where laser/LED users often do not have a sufficiently technical background to feel comfortable with the role of Laser Safety Officer. Our LED safety experts are happy to discuss the options with you and help find the solution that works best for you and your staff