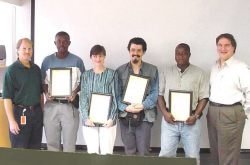 The photograph to the right shows a few of the staff of a client in Angola receiving their City & Guilds 3466 certificates in 2001. Lucid gained a dispensation from City & Guilds to deliver the training and assessments in Angola for a series of three courses at two locations. All of the equipment required for the training and assessment was carefully packed in two crates and shipped out to the client site in advance. The training was a great success, and the trainees were proud to have achieved a recognised industry qualification. Since then, we have successfully delivered City & Guilds and Open College Network qualifications in many other locations worldwide

The first two are both recognised in the UK as ‘proper’ qualifications in that they are independently audited by an official awarding body. The additional QCA approval process has the main benefit of ensuring that some ‘draw-down’ funding from a learning and skills council (LSC) may be available to pay for part of the training. The first question about any qualification should be “who is the Awarding Body?”. The Awarding Body is the organisation that publishes the certificate. This can literally be anybody, and as a result the qualification may be recognised by nobody. In the UK this situation is normally not so bad since the government set up the Qualifications and Curriculum Authority (QCA) as the overseer of national qualifications in the UK. The QCA then licence awarding bodies such as City & Guilds and the Open College Network (OCN) to develop and oversee qualifications and awards in partnership with industry. Licensed Awarding Bodies such as City & Guilds, and Open Awards, spend a lot of time and effort not only on developing and maintaining qualification, they also oversee that assessments for their qualifications are carried out properly, typically by sending an independent External Verifier out to visit their training providers, witness practical assessments and check through paperwork at least annually.

A company or organisation can issue its own certificate, but unless they are an official awarding body, licensed by the QCA or a similar national authority in another country, their certificate is not a proper qualification. This does not necessarily mean that these certificates are worthless, since the reputation of some companies can mean that other companies recognise the value of a company certificate even though it’s not an official award.

But – if it’s a qualification you’re interested in, then do check the status of the awarding body, and the relevance of the ‘award’ they offer.

Award levels are defined in the National Qualifications Framework (NQF), that was devised to indicate for trainees and employers the equivalence of various awards. Originally defined in five levels, plus higher education levels, the NQF has recently been expanded to 8 levels by the sub-division of levels 4 and 5.

The tables below are reproduced from tables provided by QCA and UK National Reference Point for Qualifications (NRP). and provide an indication of the new and previous NQF levels and how they compare to the FHEQ (Framework for Higher Education Qualification levels). Further information on levels is provided in another table from QCA lower down detailing proposed level indicators.

The use of levels in the NQF is to indicate the generally comparable outcome of an award but does not indicate that different awards share purpose, content and outcomes.

The significance of NQF levels

The positioning of qualifications at the same level only indicates that they are broadly comparable in terms of general level of outcome; it does not indicate that they have the same purpose, content or outcomes.

Proposed level indicators in the NQF

The proposed level indicators in the NQF are a guide to the range of qualifications and levels.

They describe the learning and achievement that happens at each level and show how the skills and knowledge relate to job roles. The indicators are not intended to be precise or comprehensive – they are working guides.

Currently, qualification titles such as ‘certificate’ and ‘diploma’ are not indicators of the level of a qualification.

Within the communications cabling industry National Vocational Qualifications (NVQs), gained through building a portfolio of evidence for the work you do, have not been popular. This is largely because of the time taken to become qualified and fulfil all of the evidence requirements, and the cost of evidence verifiication by qualified assessors.

The practical considerations are that NVQs can be provided at a reasonable cost where there are several candidates at the same location and the cost of assessor visits can be shared. In an industry where locations change and work is more fluid so the assessor may not witness what is needed at the time of his/her visit the costs can escalate. Since an assessor’s time is often charged at around the same rate as a day of training, many business prefer trainer led courses that lead directly to a qualification without the need to build a portfolio of evidence.

In short, the industry recognises a range of qualifications, and when
done properly NVQs can be very good, since they are ‘real-world’ qualifications
involving real work and not training simulations. However they are only
normally done by the largest companies in the communications industry (such
as telecoms operators BT and Orange for example), often as part of an apprenticeship
scheme and sometimes encouraged by government funding. For smaller to medium
sized businesses other vocational training and qualifications are generally
preferred, such as the City & Guilds 3666 or 3667 Vocationally Related
Qualification (VRQ) at level 2.

The Fibre-optic Industry Association (FIA) is a body committed to supporting and promoting the fibre optics industry. The FIA is not a licensed awarding body and did not aim to become one. The FIA did, however, recognise that the wealth of training provision had resulted in some confusion within the industry over which qualifications should be sought or specified for a job. The FIA Qualification Scheme has been designed to ensure learners gain recognition for the depth and breadth of their learning by allowing several smaller awards to be built into a larger FIA award.

The scheme is designed to be flexible so it can adapt to a fast changing industry, and it aims to ensure that training providers are committed and well-resourced professionals so that learners know they are getting good value.