We still have a couple of places left on the advanced fibre course in February. The course consists of three days of AOTDR and two days of CD-PMD. You can do both parts of the course or just one of them. Please contact the office for full details.

Before everyone closes down for Christmas just a reminder that we still have a few spaces available on the City & Guilds 3667 fibre training courses in January . Dates are January 8-12 in Crawley and January 15-19 in Cumbria.  Please contact us for full details . And Merry Christmas !

A new offshore wind farm has been given the go ahead to be constructed off the east coat of England . Possibilities for fibre technicians ?
Please see the attached post .
www.bbc.co.uk/news/uk-england-41228969

We still have one place available for the Openawards accredited Advanced OTDR course , 26-28 June . Please contact us for full details.

We still have a couple of places available on the next C&G 3667 internal and external fibre course this month which is in Crawley, very close to Gatwick Airport . Please ring for more details.

*BS 7671*”Requirements for Electrical Installations. IET Wiring Regulations”, usually called in the electrical community*The “Regs”*, is the national standard in the United Kingdom for electrical installation and the safety of electrical wiring in domestic, commercial, industrial, and other buildings, also in special installations and locations, such as marinas or caravan parks. If you need this qualification …the City&Guilds 17th Edition , we hold the exam only option here at Lucid on demand , five days each week . The price is £125+VAT . Please ring for details or to book an exam .

We now have just one place left next week on our Advanced OTDR course, which is a three day course certified by OpenAwards . Please ring for full details.

We have a couple of short weeks upon us soon with the bank holidays for Easter . It does mean we are a bit restricted to offer some of the longer courses we run . We have a little time to spare so it is a good time for anyone to do the 17th Edition exam only here , which we hold on demand at a price of £125+VAT. After that we are straight back with another Advanced OTDR course on April 24-26 . Meanwhile we wish everyone a Very Happy Easter.

We are getting an increased demand this year for the Advanced OTDR course here at Lucid . We are now running the next course on April 24-26. You are welcome to bring along your own equipment if you wish . Please contact us for details . 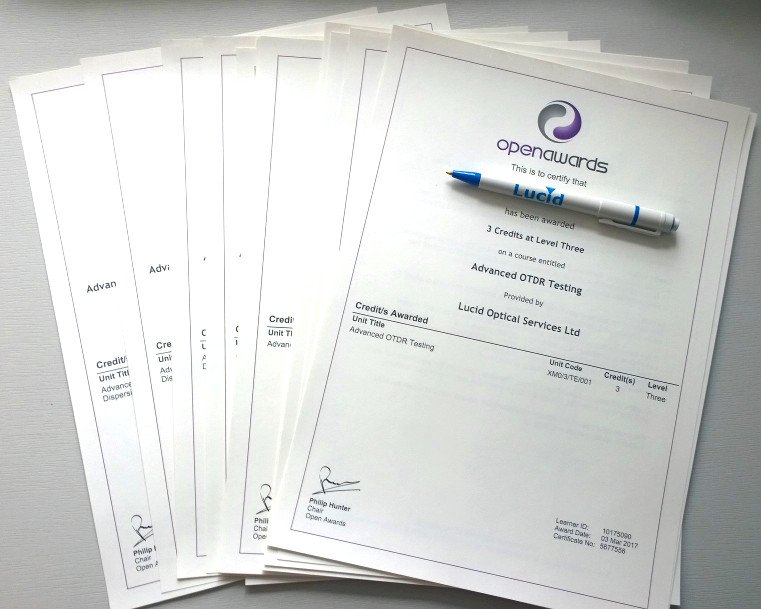 We have just received 21 new Certificates from Open Awards – which means that there are now more engineers with a UK level 3 Certificate in Advanced Fibre Characterisation in Denmark, Greece, Finland, Sweden, USA, Netherlands, England and Wales! We still have a couple of places available on our public course 27-31 March at Lucid for anyone who wants the ultimate advanced fibre testing qualification – contact us at www.lucidos.co.uk

We have just two places left on our next Advanced OTDR course here at Lucid . This course is certified by OpenAwards and is designed for managers and engineers who are required to accept, interpret or understand OTDR traces, also maintenance staff who use the OTDR for fault finding .
A basic understanding of optical fibres is required for this course .
Please contact us for full details .

We still have a couple of spaces available on the City&Guilds 3667 Units 2+3 fibre course here at Lucid this month , March 27-31 . Please ring for details .

Recently we have seen quite a few adverts for training courses, which use various terms such as ‘certificated’, ‘approved’ and ‘recognised’. This can be rather confusing, as anybody can ‘certify’, ‘approve’ and ‘recognise’ anything they like. There is no protection for these terms so people selling dodgy products can use these descriptions as much as they like. You may as well have a piece of paper from your Mum! In the UK this has been partly addressed by the licensing of awarding bodies:
*Licensed awarding bodies*
In the UK, the government has set up the Qualifications and Curriculum Authority (QCA) as the overseer of national qualifications. The QCA then licences awarding bodies to develop and oversee qualifications and awards in partnership with industry and academia. Licensed Awarding Bodies such as City & Guilds, and Open Awards, spend a lot of time and effort not only on developing and maintaining qualifications, they also oversee that assessments for their qualifications are carried out properly, typically by sending an independent External Verifier out to visit their approved training providers, witness practical assessments and check through paperwork. Checks and inspections of approved centres vary but are at least annual.
*Training Companies*
Any company, organisation, or indeed individual can issue a certificate, but unless they are an official awarding body licensed by the QCA, or a similar national authority in another country, their certificate is not a formal qualification. This does not necessarily mean that these certificates are worthless, since the reputation of some companies can mean that the value of a company certificate is widely recognised even though it’s not an official award.
But – if it’s a qualification or certification you’re interested in, then do check the status of the awarding body, and the relevance of the ‘award’ they offer.

The danger of working in confined spaces

A reminder that the threat from working in confined spaces should not be forgotten or underestimated with these two tragic incidents from the USA and Australia . Here is a tragic accident: www.bbc.co.uk/news/world-australia-38988928 This follows one in the US earlier this year: www.bradenton.com/news/nation-world/national/article126948324.html

Due to increased demand we have scheduled another AOTDR course here at Lucid , March 27-29 . This is a three day course leading to a Level 3 award , certified by OpenAwards. In the same week we have a two day CD/PMD course , March 30-31 . Please ring for more details.

Due to a last minute cancellation we now have available spaces on the next City&Guilds 3667 Units 2+3 Internal and external Fibre course . It is running here at Lucid Training Centre in Cumbria , February 27-March 3 . Please ring for details .